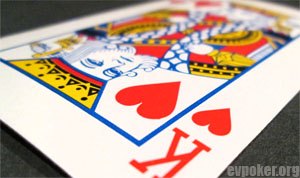 It’s in the interest of a player that master poker to a certain degree to play under such circumstances that best gain his skills in the game. These circumstances can vary depending on the playing conditions.

There are many forms of poker and combinations of these to choose from: limit, no limit, cash game, tournaments, heads up, shorthanded, longhanded and more. Various conditions such as these will influence the outcome between skill and luck in different degrees. Besides variations in game forms, there are more circumstances involved, such as blinds structure, multi table, choice of time for your playing.

There are different game forms and first we shall focus on the dividing of heads-up, shorthanded and longhanded. It’s a fact that the effects of luck will increase then the game is decided between a big group of players in comparison to a few. It will be many multi-way pots in which irrational players can be your worst opponent, and hands that for a while were weak can develop into the strongest.

By playing heads-up you will experience different conditions: you will play against only one player all the time and also the same particular player all through the game. In these conditions the strongest starting hands will more often end up as the strongest hands and that your opponent must defeat you on his own

Another dividing concerns sit n go versus bigger tournaments ... It's of course harder to win a tournament than a sit n go, but the luck as well has a bigger influence. Luck is in other words more important in a tournament. It's almost impossible to go really far in a tournament with bad cards, but with good play you could possibly be “in the money” in a sit n go even with relatively bad cards if you play the situation right.

If you play sit n gos, the blinds structure plays an important role (referring to in term of time intervals for the decreasing blinds). In a poker room, you can usually choose from different time intervals. These can be named fast, medium, slow (in a poker room lobby these more often is called names such as “turbo”, “super turbo”). There are a few things to say about this before a statement about the most suitable interval can be made. It can directly be pointed out that the longer interval between the blind limits, the more of the outcome is decided by skills. When the blinds are getting higher, the cards get more important, and that gives fewer possibilities to play the pre flop selective or to leave a pot after the flop.

Even after this statement, it's not obvious which blind structure is the right choice. A slow blind structure will on the other hand result in that it takes more time for you to win money; your hourly rate is decreasing. It would, therefore, be desirable to find a way that gives enough room for skillful play and possibilities for satisfactory profit.

Now it’s time to put sit n go against cash game. Cash game is often regarded as the number one game then it comes to skills. This statement is primarily based on the fact that genuine poker generates better EV in more situations in cash game compared to sit n go. In a sit n go, many situations must be solved in a way that are based on the larger context of the tournament and not only on a particular hand. There are, for example, situations in a sit n go then it could be discussed if it’s the right choice to fold A-A pre flop (!), something that hardly is on the agenda in a cash game.

No limit versus Limit

To choose between no limit and limit is not so much about skill versus luck (even if you can argue about this), as individual abilities in poker. No limit is probably the right choice for players that are good at bluffing and are mentally armed to survive fast swings in the bankroll.

Finally, we should discuss the idea of playing multi tables, which can generate a bigger profit in a shorter time. To play on several tables at once can also be an alternative for moving up to a higher limit. The cons of playing many tables at once are that you may be more stressed than amused by the game. To get familiar with it, there no better way than try it out and then decide what you feel about it. Most poker clients offer special adapted windows for playing multi tables.