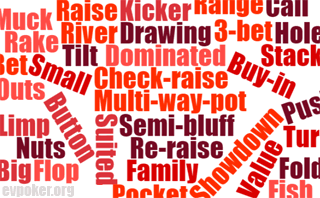 Common terms used in poker and especially terms that you may come across when reading articles on this site.

3-bet – a third bet in a sequence. Relevant terms are 4-bet and 5-bet that are describing the same principle but include a longer betting sequence.
All in – when a player bet or call with all his chips. Could also be referred to as "move in" or "push".
Bad beat – is being used in some different situations, but is often described a clear favorite hand that loses in the end to another hand.
Bet – when a player put chips in the pot. Notice that it isn’t a bet when you call or raise another player’s bet.
Big blind (abbreviated BB) – The larger of the two forced initial bets posted before a hand in Texas hold'em and some other poker games.
Button – a marker which indicate the dealer position at the table. “Playing from the button” means that a player has this position. The button should lay in front of a player showing he is in last position after the flop.
Buy-in – An amount of chips that are brought to the table in a cash game or the amount of money it cost to participate to a tournament. A relevant term is re-buy, which means a second buy-in.
Small blind (abbreviated SB) – The smaller of the two forced initial bets posted before a hand in Texas hold'em and some other poker games.
Call – to put in chips in the pot of the same size as a previous bet or raise.
Check – a player can check if none previous player has made a bet or a raise, which means he want to play on without doing a bet.
Check-raise – when first check and when raise after another player have placed a bet.
Combos – Number of possible hands within a range.
Connected cards – Cards in sequence like 4-5, 7-8.
Cooler hand – A poker hand in which both players have very strong holdings, but one is better than the other.
Dominated hand – a hand which have a card that is blocked by a card an opponent holds. For example, A-2 are dominated by A-K. Another example: A-K is dominated by A-A because the king is the only “living” card.
Drawing hand – a hand that can develop to a flush or straight.
Draw out – When a player hits a drawing hand and beat another hand which before that was better.
Family pot – when all, or almost all, players participate in. See also the term multi-way-pot.
Fish – a very weak player.
Flop – the first three community cards that are dealt together. Relevant terms are pre flop, the betting round before the flop, and post flop, the betting rounds after the flop.
Fold – when a player lay down his hand and give up the pot.
Hole cards – the same as the starting hand, i.e. the cards a player is dealt at the beginning of a hand.
Jam – to "jam the pot" means to bet very aggressively.
Kicker – the side card to another card. If the table shows A-5-T-3-Q and you are holding A-9, you got a pair of aces and a 9 kicker.
Limp – to join a pot by only pay the minimum amount. To "limp in" means just paying the blind before the flop and don’t raise.
Monster – a very strong hand.
Muck – the same as fold, see that term.
Multi-way-pot – a pot in which more than to players participate in.
Nuts – the best possible hand in a given situation.
Outs – cards in the deck that can improve a hand.
Over cards – if the table shows 5-7-8 all cards higher than 8 is overcards.
Push – the same as all in, see that term.
Pocket pair – a starting hand that is a pair.
Raise – to raise another player’s bet.
Rake – a fee that is collected from the game provider.
Range – a player’s starting hand selection.
Re-raise – to raise another player’s raise.
River – the fifth community card, also called fifth street.
Runner-runner – this is when you need to hit both on turn and river to make your draw hand
Semi-bluff – a bluff with a non-made hand, but a hand that have potential to improve on the next street.
Showdown – when all table cards has been placed and the players remaining in the hand reveal their card after the last betting round.
Slow play – to avoid betting with a strong hand as a deceptive approach. This is also called "sandbagging".
Stack – the amount of chips a player has. Relevant terms are short-stack, a stack with few chips, and chip-leader, the largest stack on the table.
Suited – a hand which cards are of the same suit. The opposite is called off suit. A relative term is suited connecters, which are a hand with card connected in order and in the same suit. Suited cards are cards belonging to the same suit or "color".
Table image – the impressions of a specific player among his opponents.
Tilt – a player in a negative emotional condition caused by frustration from events in the game. Also known as "steaming".
Turn – the fourth community card, also called fourth street.
Underdog – opposite of the favorite in a gambling situation.
Value bet – a bet made that are matching the value of the hand.

Tips for the beginner