There are 1 326 different starting hands in Texas hold'em, but if you leave out the different color constellations there are totally 169.

Which starting hands a player should play is something that has been discussed in many books about poker. By dividing different hands into categories could be helpful for the ranking. This gives an oversight and that method are going to be used here also.

The categories below are only based on the objective strength of the starting hands; therefore, it's not sure that a specific play should be applied on all starting hands in the same category. A-A (two aces) are clearly the best starting hand and there are never an option to fold with it, which may be the case for other hands in "Category 1". In the choice of starting hands, you must also consider how many players there are on the table, which structure you are playing in and your own playing style (other articles on this site focus on these subjects).

The list will not necessarily correspond to which starting hands that win most in practical play – a good term for this is ”equity-realization”, which is more about the effective odds than general playability. Which hand that works in practical play depends on different factors. One is that it's very easy to overplay some cards, like A-K. Another kind of "problem hands" is J-J and T-T. These are big hands, but the value of them decreases when a queen, a king or an ace hits the table.

All starting hands in Texas hold'em can be displayed shematically in a chart: 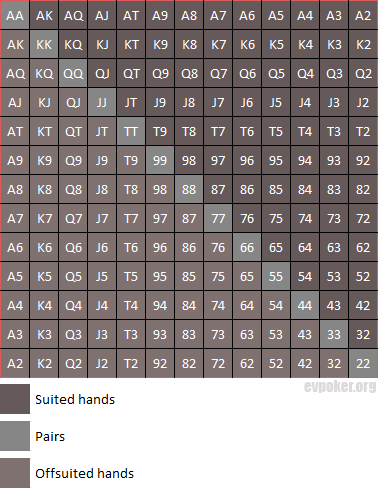 All hands, both with suited and offsuited versions are included. The real benefit of these charts appear when they display ranges, as we will se below. 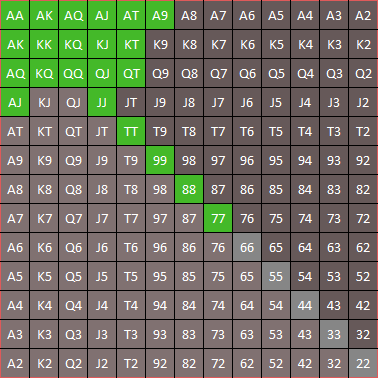 The green color marks which cards to play. It tells, for example, that if your hole cards are QT (queen-ten) you should probably play, but if your hole cards are Q5 (queen-five) you should fold. In the chart, only about 10% av the hands get a green light, which is a rather tight pre flop disposition. There are many ideas and theories about how many hands should you play in poker; see starting hands ranges for more examples and information about this.

Pocket pairs and how to play these hands