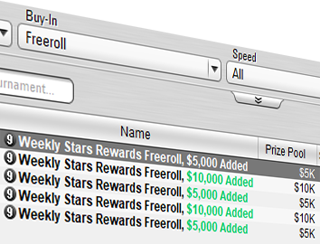 Freerolls are tournaments in which you can participate without a fee, but still have the chance to win money! You have to be a registered player at the poker room that holds the tournament. You can usually find freerolls every day; details about the starting time are normally found in the lobby of the poker room.

Nowadays, freerolls are almost a compulsory element in poker rooms. Although, it can be little harder to find freerolls for other variants besides the main variant, Texas hold'em.

There is no catching about freerolls. If you hold on and reach "the money" in a freeroll tournament, these will be at your disposal in the exact same way as if you had won them in a regular tournament with a buy-in.

Yet, a negative thing is the fact that it's often plenty of players participating in freerolls and that the prices are not so big. Freeroll, can be a great choice for beginners with small bankrolls. For them freerolls can give both experience and at least some positive impact on the bankroll.

Still, there are freerolls with substantial prize pools. These are nevertheless rare and there are usually quid pro quo-conditions, meaning that you have to do something before being able to register, such as play some amount of hands on a cash game-table the same week that the freeroll is played. Often, the criteria are pretty moderate though.

It’s almost standard that you got invitations to some exclusive freerolls than just register on a poker room for the for time. In general, there is a time limit that gives you only some weeks or some month to participate in these, so don’t miss that opportunity!

Otherwise, that is a good freeroll?

Deciding if a freeroll tournament have great value can be done by comparing two factors:

By dividing factor on with factor two you get a number of the value involved.

The value is often bigger than expected

Another thing about the value in freerolls are the fact that many players that have registered for the tournament won’t be there when it starts. It a common sight with participants that are blinded out and don’t play a single hand.

Since freerolls doesn’t cost anything, some don’t bother to participate if something else turns up, or they perhaps forget about it. That dead money and good news for you and the other on the same table.